After being held to a 0-0 draw by AS Douanes of the Niger Republic on Sunday night at the Stade Seyni Kountche, Niamey, Kwara United quickly advanced to the next round of the CAF Confederation Cup.

In the game, both teams produced a number of opportunities to score goals.

The opening leg was won last weekend by the Harmony Warriors 3-0.

Remo Stars of Ikenne were eliminated from the competition after falling to AS FAR of Morocco 1-0.

In the 56th minute, the opposition scored the game-winning goal.

In the first leg, the Sky Blue Stars held the Moroccans to a 1-1 tie.

AS FAR earned a 2-1 overall qualification. 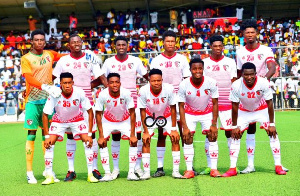